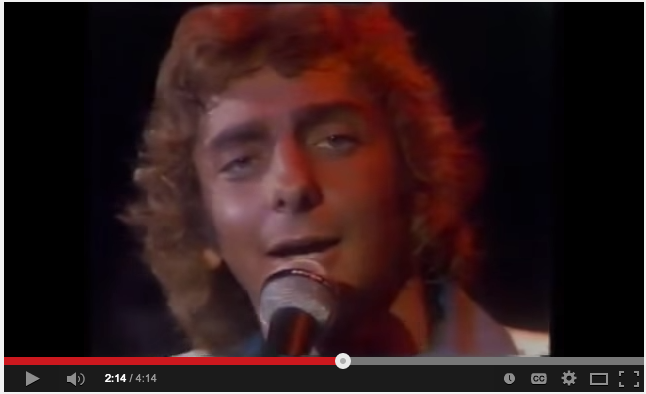 Okay…so I’m going to admit it. I’m a HUGE Barry Manilow Fan! I have most of his albums and when I was younger, he spoke to my heart. Still does, actually. Glee did an episode one season called Guilty Pleasures. Mr. Manilow was featured (along with Copacabana). For me, though, I offer no apologies. I love those melodies and the emotion in his songs.

In the late seventies he had five albums on the best-seller charts simultaneously, 25 consecutive top 40 singles and he’s sold more than 80 million records. Not too shabby! 🙂

I adore his music. During college if I came back to my apartment stressed out, my boyfriend at the time would take one look at me and say, “It’s a Barry Manilow night.” Darkened room, lit candles and a few hugs later I felt better.

So, how do you feel about Barry? Or, do you have a singer who is your secret love? Tell me about it.

And for all you ‘fanilows,’ here’s my favorite: Weekend in New England (from a concert that was televised). So, enjoy the Wayback Machine!