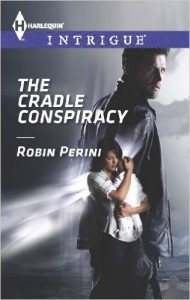 She came to slowly, her head throbbing, crippling pain skewering her temple like an ice pick digging deep. Without opening her eyes, she tried to lift her hand to touch the side of her head, but her arm wouldn’t move, almost as if it were pinned against her body. Confusion swept over her, and she forced her eyes open to sheer, cloying darkness. The air around her was fetid and stale, stinking of dirt, wet wool and…

Oh, God. Where was she? Desperation clutched at her throat.

She struggled to move, but her arms were numb. Something held her as if she were encased in a straitjacket. Frantic, she lifted her head, and her face bumped up against what felt like cheap shag carpet. She clawed her fingers beneath her and identified the distinctive weave. This couldn’t be happening.

Instinctively she gasped for air, the darkness pressing down like a vise clamped on her chest.

Was she buried alive?

Her stomach rolled, and bile rose in her throat. She couldn’t get sick. She had to escape.

She twisted and turned, struggling against the suffocating prison, scratching at the rough fabric. It was above her, below her, around her. She fought to free herself, panic mounting from deep within.

She rocked back and forth. Dirt and dust shook free. She sucked in a breath, and her lungs seized on the foul air. She had to get out.

“Help,” she tried to scream, then fell to coughing as if she’d used up the meager air supply.

Worse, the rug had muffled the sound of her voice. Wherever she was buried, would anyone hear her cries? “Oh, God. Someone help me. Please,” she croaked in a voice she didn’t recognize.

Her breathing turned shallow. The air had thinned.

She sucked in one more desperate breath and froze, aware of a new scent, far more subtle than the rest. It penetrated her mind. Sweet, familiar, and so very, very wrong. Baby lotion.

Nausea suddenly churned, and her dread escalated. Strange visions stirred through her. A pink blanket. A tiny crib. But along with the images came stabbing pain in her head that nearly shattered her.

Her thoughts grew fuzzy, and she fought to hold onto reality. Somehow she knew, if she closed her eyes, she would never wake up. She couldn’t pass out. She had to find…

A name flitted at the dark edges of her memory, then slipped away, leaving despair and terror. She turned toward the sweet scent again and breathed deeper. More flashes. Pain. Fear.

A stranger’s voice screaming, “No!”

Lights exploded behind her eyelids and darkness engulfed her, closing around one wisp of memory.

The last sound she heard was a baby’s terrified cry.