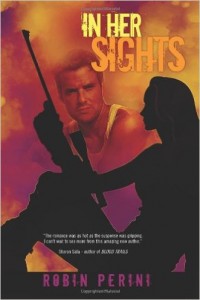 The sight was zeroed in, the balance perfect. The Remington 700/40 fit her body and her mind like an old friend she could trust, and Jasmine “Jazz” Parker didn’t trust easily. But she and this rifle were connected in a way a lover, friend, or family could never be. The Remington would never let her down.

The only hitch—she didn’t have an ideal shot at the kidnapper. Not yet, anyway.

Sweat beaded her brow in the Colorado midmorning sun. Without taking her gaze from her target, she wiped away the perspiration. Every second counted, and she had to stay ready. Negotiations had fallen apart hours ago and the ending seemed inevitable. To save the governor’s daughter, Jazz would excise the five-year-old girl’s captor.

Jazz shifted, relieving the pressure against her knees, the stiffness in her hips, but the rifle remained steady. She centered her sight on the small break in the window.

Having focused through the high-powered Leupold scope for hours, she waited for an opportunity for the scumbag’s blond head to move into range. They all made a mistake sooner or later. His face or the back of his head, she didn’t care, but she needed a clear shot through to the medulla oblongata. The kill had to be clean; the man had to crumple with no time to think and no reflex to pull the trigger.

“Blue Four, have you acquired the target?”

The question came through her earpiece loud and clear, but she spoke quietly into the microphone. “Negative.”

“Blue Two, what is target’s position?”

“Zone Two, pacing. He’s carrying the girl, a gun at her head, a Bowie on the southeast corner table. He’s nervous, unpredictable.”

Jazz could trust Gabe Montgomery’s assessment of the situation. He, unlike his brother, Luke, she could count on. And what was Luke doing in her head anyway? Now was not the time to be thinking about the one guy she should never have let near her.

“Blue Two to Blue Leader.” Gabe’s voice filtered through the communications system. “He’s on the move again. Going toward Zone One. I repeat. He’s headed to Zone One.”

Jazz’s body froze in readiness. He was coming her way. If Blue Leader ordered the guys to rush the house, she had to be on her game. She would protect them. She wouldn’t fail.

The blinds fluttered. Jazz forced her breathing into a comfortable, familiar pattern. “Blue Leader, this is Blue Four. I see movement.”

A blond head peered out, face straight on front, the area between nose and teeth in clear view.

Only a second passed before the expected order came through.

Slowly, deliberately, Jazz exhaled and, between heartbeats, squeezed the trigger.