Cowboy in the Crossfire 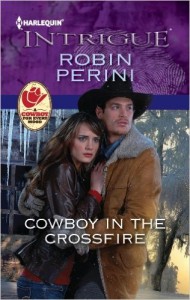 A wicked gust of winter wind buffeted Amanda Hawthorne toward the front entrance of her brother's home. She wrapped her flimsy coat tighter around her body and lowered her head. Another cold blast nearly knocked her down. Even the weather fought to keep her out of Vince's house. Well, this freak ice storm wouldn't win, and neither would her brother. He'd be furious, but she was staying. Just until she found another job.

She breathed in, hoping to kill the perpetual French-fry smell that permeated her clothes from her final shift at Jimmy's Chicken Shack. She could have lived with the odor and her aching feet, but she couldn't take his octopus hands, his foul breath or his large body trapping her against the wall in his storage room. She shuddered at the memory. She wouldn't go back. But first, she had to face Vince.

With a deep breath, she unlocked the door. "Big brother, I've got bad news. You may have houseguests for a while—"

Her voice trailed off. The photos that had lined the entryway hall lay shattered on the tile floor. The small table near the doorway teetered on its side, crushed.

She ran into the living room. The place was in shambles. "Ethan?" Oh, God. Where was her son?

She rounded the couch and skidded to a halt. Vince lay on the floor in a pool of blood, eyes staring up at her, sightless. A hole in his chest, a gun in his hand.

Her knees shook and she swayed. No.

She whirled around the room, frantic, searching. "Ethan!" she screamed. He had to be here. He had to be okay. He was only five. "Ethan, where are you?"

Deadly silence echoed through the house. Her body went numb. This couldn't be happening. Her son was her life.

Then she saw it. A small, bloody footprint on the wood floor. Streaks of red trailed across the carpet toward the entertainment center. So much blood. Too much blood.

A horrified, wounded cry ricocheted through the quiet room.

The sound came from her.

Shaking, her mind whirling through unthinkable images, she followed the blood to the cabinet. Sobs clutched her throat as she tossed aside a slew of DVDs dumped in front of the oak furniture. Bracing herself for the worst, she held her breath and opened the door.

She clutched at the wood to keep herself from collapsing. "Ethan!" Her stomach roiled. She should never have left him. Ever!

A choked whimper broke from behind another section on the unit.

She snatched the brass handle and yanked it open to reveal her five-year-old huddled in a ball, rocking back and forth. Alive.

Amanda's knees quaked with relief. She couldn't stop the tears that poured down her face. Her son was alive. She snatched him from the cabinet and folded him into her arms. She couldn't stop touching him. His arms, his legs, his hair, his tear-streaked face. With a trembling hand, she stroked his blood-stained pants. "Are you hurt?"

He shook his head. "U-Uncle Vince."

"I know, little man. I know." She rocked him back and forth, her chin on his soft hair. His small arms clung to her as if he would never let her go. "It's okay. Mommy's here." She repeated the words over and over again, as much for herself as for Ethan.

She shot up a thankful prayer, then her gaze fell to her brother's body. Blindly, Amanda searched for the cell in her pocket to call 9-1-1. She pulled out the phone and started dialing.

Ethan grabbed her hand, his eyes wild with panic. "No, Mommy. Uncle Vince said for us to run away."

She clasped Ethan to her, trying to calm him even as an icy wave of terror threatened to freeze her from the inside. Vince had been a stand-and-fight kind of guy. A cop. If he'd said that, then they weren't safe in this house. Maybe not safe anywhere.

Ethan wrapped his arms tight and squeezed. "Blake. Go to Blake," he whispered in her ear, his voice shaking with a terror no child should ever feel.

She stilled. "Where did you hear that name, little man?"

"Uncle Vince." Ethan buried his face in the crook of her neck. "Go to Blake."

Ethan stuck his thumb in his mouth, something he hadn't done in over a year.

Go to Blake? Why would Vince say such a thing? Blake Redmond hated her brother. No way was she going to Blake for anything. She'd take care of herself and her son.

Pressing Ethan's face against her shoulder, she ran to her brother's body. With a gulp, she crouched down. She snatched the gun from Vince's hand for protection, hurried to his desk and wrenched open the drawer. Thank goodness. The grocery money was still in the bank bag. She stuffed it and the gun into her purse.

Amanda carried Ethan to the front hallway, pried her son's arms from around her and set him down. "We're getting out of here, Ethan." She kissed his forehead, then bundled him into his navy-andorange coat, scarf and gloves. She tugged on his hat and covered his ears.

Ethan sneaked a look into the living room at Vince, and his face went blank. He'd shut down. Amanda gave his hat a last tug. "Don't worry, Mommy will take care of you."

With Ethan in her arms, she raced out of Vince's house into the cold late-November night. How would she ever make things all right? She had nowhere to go, no one to help her. She only knew they had to get away.

Hands shaking, she unlocked the car, tossed her purse inside and settled Ethan into his booster seat. He scooted back. She brushed his hair aside. "We'll be safe."

Someone grabbed her from behind. "You won't keep the promise," the deep voice sounded in her ear.

Amanda whirled around. A man in a ski mask loomed above her. She shot a panicked glance to the car. The gun was still in her purse. She reached into her pocket for her phone. The man grabbed the cell, threw it to the ground and rammed her against the car. "Where did Vince hide it?"

"No games." His grip tightened. "Tell me, and you and the kid live."

The cold look in his eyes belied his words. He'd never let them go.

The man's arm pinned her neck. He pressed against her windpipe, harder and harder. She gasped for air, tried to pry him away. Stars exploded in front of her. Blackness threatened to swallow her whole. Oh, God. She was dying.

"No!" she choked. Aiming for his knee, Amanda kicked out hard. She heard a sickening pop. With a shout, he fell to the ground, clutching his leg.

She dived into the front seat, shoved the key into the ignition and jammed the car into gear. The attacker struggled to his feet, cursing at her.

Amanda backed through Vince's front yard and spun into the street.

Shots rang out, followed by the thwack of bullets hitting metal. Fire seared across her side. Half-crazy with shock and fear, she punched the accelerator. Her car jerked forward and sped down the street, but not before she saw the man limp to his car and start after them.

He would not get Ethan. She'd die first.

In desperation, she screeched around a turn into an alley. Headlights followed dizzyingly in her rearview mirror. She had to lose him. "Are you all right, Ethan?"

His panicked whimper was the only sound from the backseat. Oh, no. Had he been hit? She twisted around to check on him even as pain sliced across her ribs. Fighting through the agony, she scanned her son. He was in shock but looked unhurt. Unlike herself. Amanda pressed her palm hard against her side. It was warm and wet.

She stared at her hand. It was red. Very, very red. She'd been shot. Right through the door.

Her panting matched Ethan's. Her fingers had gone numb with cold. She had to stop the bleeding or she'd pass out. She gripped the steering wheel tight. Think, Amanda. Think of someplace safe to stop.

A quick right, then left brought her to a dark side street. She floored it and streaked toward Main. With a quick prayer, she skidded to a halt in a parking lot full of cars and turned off the engine and lights.

He slid out of the booster seat and sank to the floorboard. Trying to ignore the pulsing pain in her side, Amanda crouched low against the cracked vinyl. With one hand she reached back and stroked Ethan's head, buried in his arms. She tried to comfort him without words, but his body trembled, and her heart ached.

With the other hand, she searched her purse for the gun. Holding the weapon firmly, she shrank down even more and gripped the butt hard. Her fingers shook.Please, let her live. Let her keep Ethan safe.

The cold seeped into her skin. Every shallow breath turned into a visible wisp of air.

Ethan's small voice pierced her heart. "We're okay, little man." She kept her voice calm and reassuring, while inside the panic had her heart galloping. "We just have to be very, very quiet."

His sniffles were the only sound as she waited. Headlights passed by, but she couldn't chance raising her head. Her fingers cramped around the metal of the gun. She stayed still. Seconds dragged into minutes as she waited, praying no one would see or hear anything.

After what seemed an eternity, Amanda sagged against the seat. "I think it's safe."

At her words, Ethan scrambled into the front and dived into her arms, his face streaked with tears. She fought not to cry out in pain, but couldn't stop a small gasp.

He leaped back. "Are you hurt? Like Uncle Vince?"

But she wasn't. And she knew it.